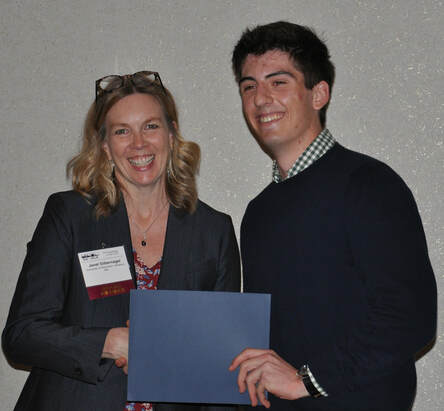 D​r. Michael P. Dombeck will be awarded the 2019 Distinguished Landscape Practitioner Award by the United States Chapter of the International Association for Landscape Ecology (US-IALE).  This honor is bestowed to individuals who have made outstanding contributions over a period of years to the application of the principles of landscape ecology to real-world problems.

Dr. Dombeck is one of the most respected and active contemporary conservationists who continues to redirect the course of land stewardship for future generations. After a quarter century of leadership for our federal lands, Michael now directs the Smith Conservation Fellows program which “seeks to develop future world leaders and entrepreneurs who are successful at linking conservation science and application,” – a mission to which he is dedicated.

Dr. Dombeck led a prominent career in public lands management, policy, and leadership. His roles included:  National Fisheries Program Manager (1986-1989), Science Advisor and Special Assistant to the Director, Bureau of Land Management (1989-1992), followed by Acting Director of the Bureau of Land Management (1994–1997), and the fourteenth Chief of the U.S. Forest Service (1997-2001).  These roles place him at the helm of key environmental conservation and management decisions for public lands in the U.S. throughout this critical period.

Dr. Dombeck successfully managed these various agencies despite numerous challenges. During his early years with the Forest Service, for instance, Dr. Dombeck integrated fisheries and watershed protection policies on national forests while forging strategic partnerships. Later, he played a significant role in the landmark spotted owl conservation decision and precipitous decline in timber revenues, followed by a changing political landscape and diverse public and internal staff opinions around public lands. As USFS Chief, he was instrumental in leading the controversial Roadless Rule, along with important advancements in ecosystem management and watershed restoration. While USFS Chief, Dr. Dombeck operationalized ecosystem management across the agency, making it core to every practice in the USFS and emphasizing water as a valued forest product. Through his leadership for federal lands, Dr. Dombeck cultivated and advanced the North American conservation model that is truly unique among protected areas in the world.

From these experiences, Dr. Dombeck published several books, including, “From Conquest to Conservation: Our Public Lands Legacy” (Island Press).  He has published many key papers on conservation, public lands, and policy.  He has been awarded over 20 conservation awards from numerous organization including The Sierra Club, The Wilderness Society, Ducks Unlimited, and the American Sportfishing Association.

Michael served as UW System Fellow and Professor of Global conservation at the University of Wisconsin-Stevens Point from 2001 to 2010.  He continues to support environmental leadership of the next generation internationally as Executive Director of the David H. Smith Conservation Fellows Program.  His career has left an indelible conservation legacy that continues to this day.