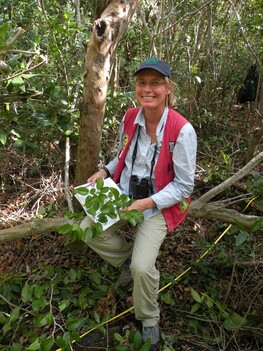 Dr. Janet Franklin, Distinguished Professor and Distinguished Biogeographer at University of California – Riverside will be awarded the 2021 Distinguished Landscape Ecologist Award by the North American Chapter of the International Association for Landscape Ecology (IALE-NA) at their annual meeting, which is to be held virtually in April 2021. This is the highest honor bestowed by IALE-NA and recognizes those unique individuals whose thinking and writing have helped to shape the field of landscape ecology.

Dr. Franklin has been a faculty member at UC-Riverside since 2017. Before then, she was at Arizona State University (where she was the Regent’s Professor in the school of Geographical Sciences and Urban Planning) for two years. She spent the majority of her career at San Diego State University since completing her PhD at UC Santa Barbara in 1988. One of Dr. Franklin’s nominees stated that “(her) scholarship has greatly shaped the field of landscape ecology”, citing contributions to conservation biology, global change biology and species distribution modelling (SDM). Her work on SDM is especially noteworthy for the way she combine geospatial data analysis and modelling with innovative fieldwork and technological developments. Her research has helped promote landscape ecology to fields as diverse as vegetation science, community ecology and geographic information sciences. One of Franklin’s nomination letters stated that “(her) work has made tremendous positive impacts on biodiversity assessment, reserve design, habitat management and restoration, species and habitat conservation plans, and prediction of the effects of environmental change on species and ecosystems”.
​
Dr. Franklin has made many contributions to the societal aspect of Landscape Ecology. She served as councilor-at large from 2010-2012 and president of US-IALE (the precursor to IALE-NA) from 2014-2016 and as local host for the 2006 meeting in San Diego. Her service has extended beyond the discipline of landscape ecology with service as Editor-in-Chief at the journals Diversity and Distributions, and The Professional Geographer, as well as guest-editor for four special issues on ‘Spatial Ecology’ for the International Journal of Geographic Information Science. She is currently Deputy Chief Editor for Frontiers of Biogeography.

Franklin is a prolific author with over 185 publications in journals, proceedings and book chapters. Her 2010 book “Mapping Species Distributions: Spatial Inference and Prediction” has been highly influential. The National Academy of Science elected Franklin in 2014, and in 2015 both the Ecological Society of America and the American Association for the Advancement of Science named her as a Fellow. In 2020, the American Association of Geographers recognized her with the James J. Parsons Award for Outstanding Lifetime Achievement in Biogeography.

Women provide strong intellectual leadership in North American landscape ecology. Franklin told the awards committee that she is honored to join their ranks as a Distinguished Landscape Ecologist recipient, and looks forward to contributing to the society’s work to increase diversity, equity and inclusivity in the field of landscape ecology”.

For more information about Dr. Franklin, please visit her website at https://jfrankl39.wixsite.com/vale.