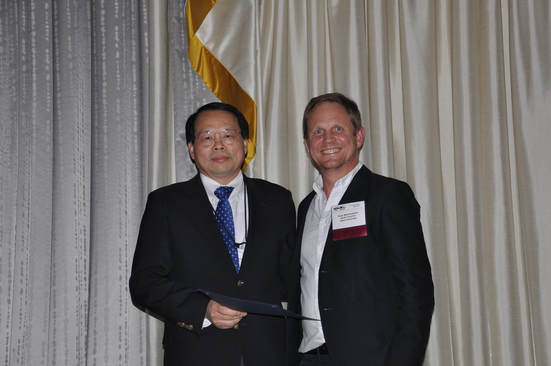 Dr. Jianguo “Jack” Liu, Rachel Carson Chair in Sustainability, University Distinguished Professor at Michigan State University, and Director of the Centre for System Integration and Sustainability will be awarded the 2018 Distinguished Landscape Ecologist Award by the United States Chapter of the International Association for Landscape Ecology (US-IALE) at their annual meeting in Chicago, IL, in April 2018. This is the highest honor bestowed by US-IALE and recognizes those unique individuals whose thinking and writing have helped to shape the field of landscape ecology.

Dr. Liu has been at Michigan State University (MSU) since completing his postdoc at Harvard and his PhD at the University of Georgia in 1995. His research bridges social and environmental sciences. He adopts a holistic approach to addressing complex human-environmental challenges, and conducts research in both the United States and China. His work addresses such novel interactions such as divorce rates and environmental impacts, as well as research on the iconic pandas of China. His novel contributions are noted by Dr. Li An, from San Diego State University, one of the nominators. Dr. An notes that “Dr. Liu is a pioneer in integrating landscape ecology with social sciences and policy for understanding landscape complexity and sustainability. He has been leading the effort in developing and implementing an integrated framework for landscape ecology – landscapes as coupled human and natural systems.”

One of Dr. Liu’s most notable contributions to Landscape Ecology is the establishment of the NASA-MSU Professional Enhancement Awards. These awards are given annual to outstanding graduate students attending the conference. Each year, 20 of these awards are given, and they include a monetary award to help students offset the travel costs. These awards were created initially as a one-time feature of the meeting in Michigan, but through Jack’s hard work and persistence, he has sustained support from NASA and Michigan State for over 20 years. NASA-MSU awardees and alumni are recognized annually at an invitation-only banquet, and past awardees now have had their own students recognized as awardees. Jack has also fostered networking amongst NASA-MSU alumni; many awardees have taken leadership roles within US-IALE or have collaborated to organize symposia or initiate new research. Liu has also served as president of US-IALE and is the founded of the International Network of Research on Coupled Human and Natural Systems (CHANS-Net.org).

Liu is a prolific author with over 200 publications in journals, proceedings and book chapters, including over publications in Science, Nature and PNAS. These have touched on a broad range of topics, and been highly cited. Liu has previously been recognized as a Fellow of the American Association of the Advancement of Science (AAAS) and as a recipient of the Guggenheim Fellowship Award, the CAREER Award from the National Science Foundation and two awards from the Ecological Society of America (the Sustainability Science Award and the Aldo Leopold Leadership Fellowship). He has also previously been recognized by US-IALE with the Distinguished Service Award in recognition of him any years of support for student participation at the conference. He is also an author on the paper selected in 2006 as the “Outstanding paper in Landscape Ecology”.

One of Liu’s nomination letters stated that “I highly recommend him for this award as he excels in his research and communicating new ideas to diverse audiences” and another noted that “Dr. Liu has also shaped the field of landscape ecology through mentoring and supporting new generations of landscape ecologists”.

For more information about Dr. Liu please visit his website at http://csis.msu.edu/people/jianguo-liu.